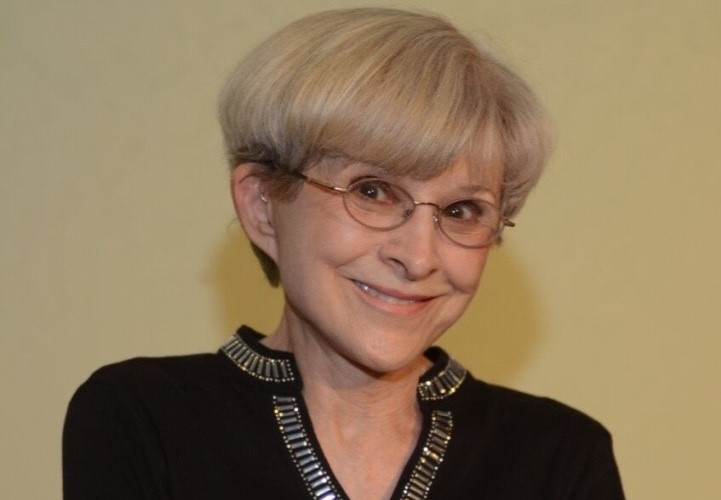 Judy Rollings has been working with the Herberger Theater Center since its early days. Currently the Director of Art Education and Outreach, Judy directs Lunch Time Theater and the Arizona Young Artists’ Competition.

If you have ever attended a Lunch Time Theater show, you know Judy’s famous curtain speech, which she executes precisely and consistently three days a week. Many Lunch Time Theater regulars recognize Judy and applaud her as she makes her entrance to the Kax Stage.

The idea for Lunch Time Theater came from Judy’s realization that the Herberger Theater stages were just too full to feature new artists. The most prominent artists in the scene were taking many of the dates on the big stages. This meant that in order to fulfill her passion for outreach, Judy needed to come up with a solution. Thus, Lunch Time Theater was born.

In 2001 the rehearsal hall was reimagined and equipped to do theatre performances.  The first LTT show took place in February that year.  However when the Herberger Theater was renovated in 2008, it completely converted what was once its rehearsal hall/black box theatre into a space solely intended for intimate performances. This renovation set the stage for Lunch Time Theater as it operated for 20 seasons as a program originally intended for downtown workers to enjoy their lunch breaks.

It wasn’t all this easy though. For many years, Judy Rollings worked tirelessly with her associates, Dee Rich, Cherie Donahue, and most recently the amazing Mary Robinson, to build the program. Together, their efforts have made Lunch Time Theater a successful outreach program and enrichment experience for guests, while allowing up and coming artists to showcase their work in a professional environment.

Judy looks forward to continuing Lunch Time Theater with her new associate, Elizabeth Broeder.  Elle has been seen on stage with iTheatre Collaborative among other companies, as a summer intern with Lunch Time Theater, and in the Herberger Theater box office!

Judy is also one of the founding members of the Arizona Young Artists’ Competition, a scholarship competition for young performing artists. As one of the members of the program committee, Judy has helped evolve the program into the massive success it is today, managing the drama portion of the event and overseeing the outreach to schools and artistic studios.

Judy is a founding member of Actors Theatre of Phoenix and served as the Artistic Director for over eight years. During her tenure, they won the Critics Circle Award for Innovative Programming – Brown Bag Theater and the Best Professional Theater Award.

Throughout her tenure in Arizona, Judy has received a number of awards that include Best Director of a Drama, Arizoni Lifetime Award for Outstanding Contribution to Theater, and the 2010 Actors Equity Association Theatre Service Award.

As an actor herself, Judy innovated and ran the successful STAGES actor training program. Her current acting credits include Spinning Into Butter, The Death Bite, her own one-woman show Starring Judy from Chicago, Light Up The Sky, Suocera, Over The River and Through the Woods, The Velocity of Autumn, Ripcord and Love or Money. Current directing credits include Collected Stories, Sudz, Honor, Eleemosynary, The Road to Mecca, Nureyev’s Eyes, Doubt, Great Falls, And Miss Reardon Drinks A Little, The Herd, Trying and Rathmines Road.

Judy is a member of the Board of Directors of the Theatre Artists Studio where she acts in and directs performances as well.

If you ever see Judy in the theater, make sure to say hello!