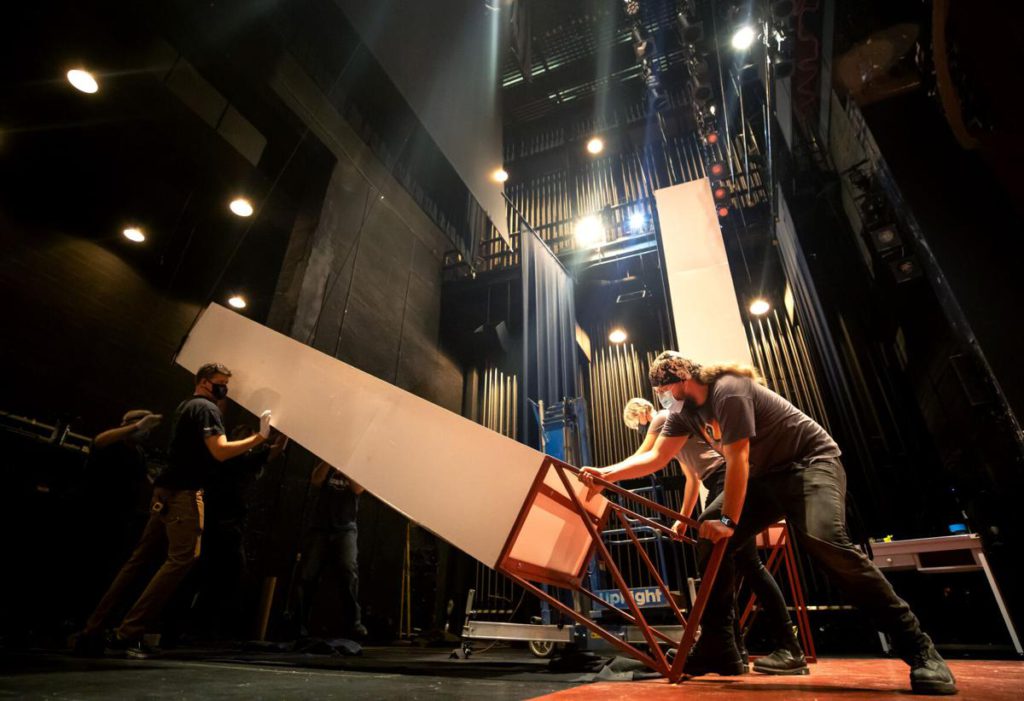 Ropes are hoisted from the catwalk, known as the high steel, above the theater space at the Temple of Music and Art and tied to white light boxes, each one 15 feet tall, lying horizontal on the stage.

A voice is heard shouting, ‘Applying tension!’ from above. The ropes tighten as crews on the ground guide each box into an upright position.

Like Roman columns, the boxes tower above crew members, each box standing tall as if ready for their theatrical debut.

For the first time in 18 months, there is a set on the Arizona Theatre Company stage.

‘I am so glad it came together,’ said Taylor Moss, who serves as assistant technical director for ATC. ‘We see everything in pieces. We get pieces of whatever comes from the creative team. We get pieces of information from artistic management. We see pieces of scenery that come out to the shop floor and it’s like, ‘I don’t know what this is going to look like when it all comes together or painted or with props on it.” After being shut down for the last year and a half, ATC reopened this weekend with previews of its current production, ‘My 80 Year Old Boyfriend.’ The onewoman musical is based on the true tory of actress Charissa Bertels, who creates an unlikely friendship with an octogenarian named Milton. Its opening night is Friday, Oct. 1.

‘My 80-Year-Old Boyfriend’ was initially set to open the 2020-’21 season, but was canceled due to the pandemic. It was pushed back to January of this year, then pitched as a possible streaming film in March, said Sean Daniels, its director.

‘Every time we’d call people and were like, ‘Okay, this is our first rehearsal,’ everyone was like, ‘Sure, sure, you got it. When we get closer you’ll call me again,” Daniels said.

Even during the first rehearsals of this latest attempt, Daniels and Bertels were unsure if the season was going to happen.

After taking a tour of the Temple of Music and Art on her first day in Tucson, Bertels, who hails from New York City but has lived in Kansas since the pandemic, was excited that things were back.

‘It was nice that first day to be like, ‘Oh my gosh this is really happening,” Bertels said.

For Charlotte Alcorn, the ATC artist in charge of overseeing the scenery, the moment the season officially started wasn’t when they were working in the production shop, looking for props or seeing the set on stage. It was during the designer run.

The designer run, which happens about a week before the tech and final rehearsals, is when the design team sits in on rehearsal with the directors, performers and stage managers.

Alcorn said the experience made her emotional.

‘I personally have been waiting for the other shoe to drop for a very long time,’ said Alcorn. ‘Because more shoes kept falling. So, even coming back and (with the ATC) saying we were going to go and everything, I was like, ‘but are we really?” Props supervisor Sara Pugh felt like things might be back in full swing at the first tech rehearsal. For Pugh, the rehearsal felt surreal at first, but as it continued, she thought, ‘I am home. I am right where I need to be,’ she said.

ATC is currently requiring face masks at performances, and proof of vaccination or a negative COVID-19 test taken within 72 hours of the show.

The original article by Rebecca Sasnett can be found here.