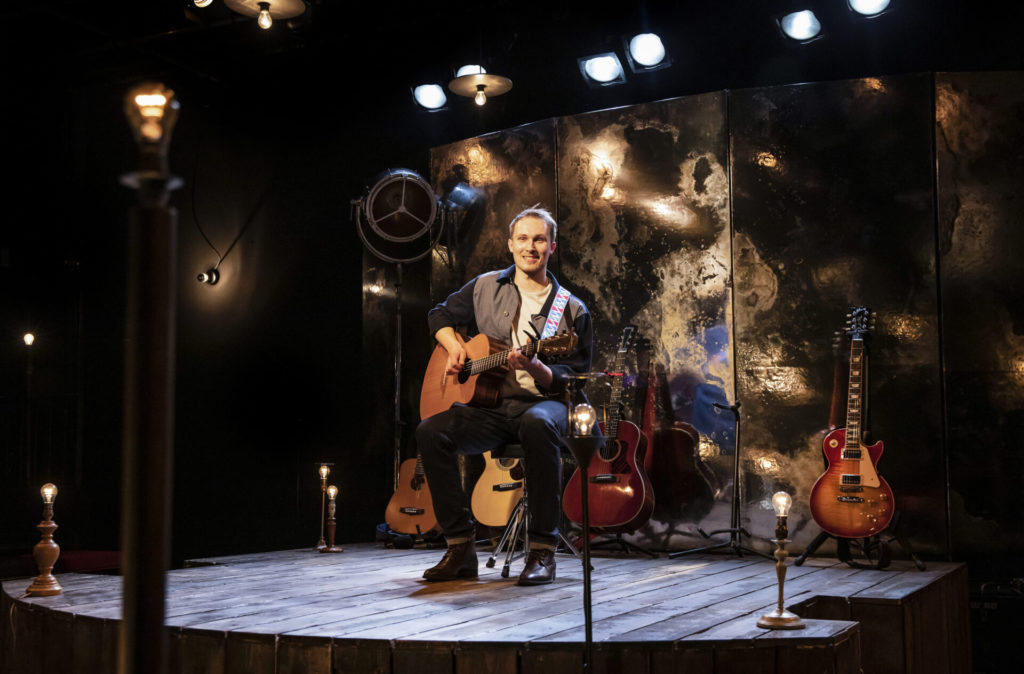 Arizona Theatre Company (ATC) single tickets went on sale for its 2022-2023 season this week. The collection of shows features some beloved and charming classics as well as new entertainment for Arizona audiences.

The season kicks off with The Lion which runs from September 24 to October 15 in Tucson and October 20 to November 6 in Phoenix. Presented in association with Danielle Tarento, The Lion, is a heartwarming and powerful one-man folk musical. This mesmerizing true story of survival and redemption reminds us that great things can come from challenging times. Max Alexander-Taylor stars in the lead role of Ben with a supporting cast of six guitars. The Lion is a story about courage; the music about finding it. The show will be co-produced with Cincinnati Playhouse in the Park.

ATC fans may remember its holiday show from last year, Christmas at Pemberley, as it introduces a new addition to the storyline, The Wickhams: Christmas at Pemberley. The show runs from November 5 to December 2 in Tucson and December 8 to December 23 in Phoenix. Boisterous sister Lydia Wickham returns front and center for this holiday season joined by her long lost husband and the home’s downstairs residents. The bustling staff find themselves amid a holiday scandal, complete with misunderstandings and shenanigans. When the festivities spiral into chaos, Lydia finds her voice in this celebration of family and forgiveness. Don’t miss this sequel to last season’s holiday show!

Rounding out the first half of the season is The Glass Menagerie, a poetic and raw portrayal of a family on the brink of change. Reimagined for Arizona Theatre Company’s stages, this intimate and intense classic that changed the way we tell stories draws from the memories of narrator Tom and explores the complex web of love, longing, loyalty, and constraints that bind families together. Directed by ATC’s own Chanelle Bragg, the show runs from January 21 to February 11 in Tucson and February 16 to March 5 in Phoenix.

The second half of the season starts with excitement as ATC presents the world premier of Pru Payne. Written by Pulitzer Prize Nominee Steven Drukman, Pru Payne is a remarkable, funny, and life-affirming story about the relationship between a mother and son. An esteemed critic, Prudence “Pru” Payne is widely recognized as a wit, a scholar, and a public intellectual; her son Thomas lives in that shadow. But as her memory begins to fade, all her preconceived notions – about herself and, more importantly, others – also slip away. Pru Payne runs from March 4 to March 25 in Tucson and March 30 to April 16 in Phoenix.

Get ready for some laughs in ATC’s next show, Private Lives, which runs from April 15 to May 6 in Tucson and May 11 to May 28 in Phoenix. Amanda and Elyot are enjoying a romantic honeymoon – just not with each other. This hilarious classic comedy filled with clever, witty barbs starts when an explosive divorced couple and their new spouses inadvertently honeymoon in adjacent rooms at the same hotel. When combustible chemistry reignites, mayhem occurs, and strong passions and stronger personalities take over. Noël Coward’s most popular and enduring comedy is a funny, tempestuous battle of equals.

Closing out the season is the long-awaited show that was scheduled for the 2020 season, but was delayed due to the pandemic. The Legend of Georgia McBride runs from June 3 to June 24 in Tucson and June 29 to July 16 in Phoenix. This big-hearted, fierce, music-filled comedy has been hailed as “stitch-in-your-side funny” by the New York Times. Casey, an Elvis impersonator with everything going for him, including a flashy sequin jumpsuit, suddenly loses his gig, his rent is overdue, and his wife announces a baby on the way. So, when Elvis leaves the building and a drag show moves in, “The King” transforms into an all-out queen. With some snappy zingers and dance-worthy numbers, this wildly entertaining story challenges assumptions with extraordinary humor and depth.

Most shows in the ATC season can be enjoyed for $25-$80 depending on seat location. For tickets and more information, visit ATC.org.

Featured photo: The Lion On the Stage at Southwark Playhouse: London | Photographed by Pamela Raith